So it was that Aibesta of the Two Courts compiled her notes into a Signature, and arrayed herself for travel. To her signature she added a selection of useful magics to speed and comfort her on her way, and she set out for consultation with her mentor, the great scholar Wistride the Aur...

She died at Haidor, overcome by Murderous Ghosts set upon her by Justu the Necromant. Her grimoire was found later by a treasure-scavenger, and added to the collection of a scholar-nun of the Monast. At that order's dissolution, it was sold to pay for rites of indemnification and funeration, then stolen by a reaver in transit over the Salt Road of Brash, then carried to various parts by a variety of persons, some virtuous, some bold, some sly.

By its particular and circuitous route it has reached, four centuries and more later, you.

In The Wizard's Grimoire, you're a conjurer, scholar, rogue, and minor wizard, and you've come into possession of an ancient and powerful grimoire, the Signature of Aibesta of the Two Courts. Will it see you to triumph and the achievement of your every ambition, or will you destroy yourself in the pursuit?

The Wizard's Grimoire is a pen-and-paper rpg with a twist. Instead of a GM saying, "hey, I have this game I'd like to run, who's in?" you say, "hey, I'm trying to get my wizard through this spellbook, do you have a minute?"

You need two friends who'll volunteer to play with you. Each session that you play is an episode in your wizard's study and adventures. They can be as short or as long as you like, you can play as often or rarely as you like, and you can have different volunteers, or the same ones, every time you play.

At the heart of the game is the grimoire: a text of many sections and its own set of rules. Each section represents a wizardous advancement you can achieve, a new spell you can learn or act of wizardry you can undertake, but each also has its own rules for defeating its safeguards, unlocking it, and studying it. Don't read ahead! You can only read the sections you've unlocked and studied.

Your first grimoire is a challenging 1st-level text called "The Signature of Aibesta of the Two Courts." Work your way through the entire grimoire, and not only will you learn powerful new spells, you'll establish your workroom, the foundation of your future seclusium; you'll learn techniques to better subdue and study future grimoires; and you'll accomplish what Aibesta herself couldn't: the summoning of an Impeccable Servant.

The Wizard's Grimoire - Printouts (pdf) contains the pages you'll need to print in order to play. Print two copies of the Volunteer's Guide and the Bestiary, for your two volunteers, and a copy of the Wizard character sheet for yourself.

The Wizard's Grimoire eZine (pdf) is the digital version of the complete game, including the rules of play and the Signature of Aibesta of the Two Courts.

The Wizard's Grimoire plaintext (txt) is a plaintext version of the complete game.

SPOILERS The Wizard's Grimoire - Secret Section X (pdf) contains material you'll need when you unlock Section X of the grimoire. Don't open it until then!

The Wizard's Grimoire is the first issue of a zine series. Future issues include:

The Barbarian's Bloody Quest: A wizard murdered and enslaved your people. Now you're on a bloody quest for revenge. Let all wizards beware!

The Last Adventure: You’re dead, once a hero, but now old, alone, and dead in the land of death. Will you answer the calling voice? Will you seek the sup of oblivion? Or will you end your last adventure on your own terms?

The Three Scrolls of Jorvelte Wild-Crown: A 2nd-level wizard’s grimoire, comprised of three volumes: "The Avaricious Student," "The Wizard Imperiled," and "Glimmering Menace," each containing its own powerful spells.

The Red Tome of Salabrusto the Wise: A 2nd-level wizard’s grimoire which contains the secrets of other worlds, including the spells necessary to summon entities to appear from them, and even to fling yourself bodily between them.

The Thief & the Necromancer: You’re friends, a thief and a necromancer, both leaving behind oppressive situations, taken together in mutual amity. Let the world marvel at what you will together accomplish.

In order to download this game you must purchase it at or above the minimum price of $15 USD. You will get access to the following files:

Support this game at or above a special price point to receive something exclusive.

Budget tight? Can't justify buying this even though you want it? We've been there! Grab a community copy for free, no questions asked.

This game is so fun! Are there plans to upload further issues of this zine to itch.io? 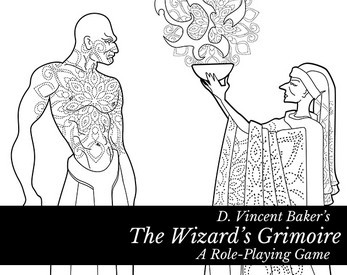